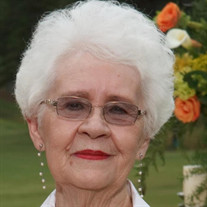 The family asks that in lieu of flowers that memorials may be made to the Guin First United Methodist Church, Post Office Box 515, Guin, AL 35563. Adeline Elizabeth Baker, age 94, passed away Monday, January 25, 2021, in the Marion Sunset Manor Nursing Home in Guin. She was born October 8, 1926, and was the daughter of the late Steve and Elizabeth Kiel of Milaca, MN. Adeline and her late husband, Robert (Bob) Baker were one of the original families that came to Guin in 1954 to help start the 3M Company. They were also one of the first families that lived on “Yankee Street”. She was active in her church, the Methodist La-dies group, Bridge club, Birthday club and the Red Hat Society. She loved to read, to do crossword puzzles and was also a dedicated volunteer for the American Red Cross for many years. Adeline took great pride in her grandchildren and took every opportunity to brag on them. She loved watching them play sports and attended games as long as she was able. She also helped her son, Don, at Pikeville Country Club for numerous years. She was a sweet, gracious lady that was loved by many. She is survived by her two sons, Scott (Andrea) Baker of Lexington, SC, and Don (Bobbie) Baker of Guin, AL. She had five grandchildren, Rob Baker of Chicago, IL, Kiel (Jennifer) Baker of Columbia, SC, McCall (Jay) Brennan of Columbia, SC, Kelee (Kyle) Williams of Guin, AL, and Hanna (Casey) Fox of Guin, AL. She had nine great grandchildren: Baxley and Kyler Baker; Baker and Anna Scott Brennan; Cooper Reese, Mary Camille, and Cate Williams; and Elizabeth and Bailey Fox. She was preceded in death by her parents, her husband, a brother, Robert Kiel, sisters, Beatrice Bouma and Viola Kiel, and a grandson, Reese McDonald Baker. A family graveside service will be held on Saturday, January 30, at the Guin City Cemetery. Pastor Belinda Freeman officiating.

The family asks that in lieu of flowers that memorials may be made to the Guin First United Methodist Church, Post Office Box 515, Guin, AL 35563. Adeline Elizabeth Baker, age 94, passed away Monday, January 25, 2021, in the Marion Sunset Manor... View Obituary & Service Information

The family of Adeline Baker created this Life Tributes page to make it easy to share your memories.

The family asks that in lieu of flowers that memorials may be...

Send flowers to the Baker family.