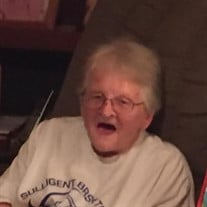 Anita Kilburn Gilmore age 82 of Detroit, AL passed away Friday, April 26, 2019 at her residence. Born September 25, 1936 in Caledonia, MS she is the Daughter of the late Jaunita Seely and William "Billie" Kilburn, Sr. and the Wife of John Jackson... View Obituary & Service Information

The family of Anita Kilburn Gilmore created this Life Tributes page to make it easy to share your memories.

Send flowers to the Gilmore family.