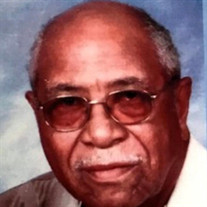 Our loving brother, Charles Edwin Swanigan, was born to the proud parents of the late Joe Austin Swanigan, Sr. and Ruthie Mae Moon Swanigan on December 10, 1936 in Guin, Alabama. Charles was baptized at a very young age at Real Chapel CME Church in Guin, Alabama. He graduated high school from "Guin Colored School" in the spring of 1955, a very great achievement for a young black man during this era. Soon afterwards, Charles set roots in Savannah, Georgia, where he met Willie Mae Morell. They soon fell in love and were married. They were married for several years until Mae's early call to glory. Many years later, Charles, thinking he would never find another lady like his beloved Mae, soon found himself in love with, in his own words, "his angel", Mary Simmons who became his long-term life companion until his last day. We always get a good laugh, as Charles would always call her at least ten times a day, sometimes for no reason except to say "I love you". Though Charles never had biological children, he was blessed with an abundance of step-children and step-grandchildren, all of whom knew he loved them from the depths of his soul. Charles truly loved his brothers and sisters, his nieces and nephews, and all of his cousins and old friends. He always made it a point to visit as many people as he could when he visited his hometown of Guin. He was a beloved member of his church, and everybody on every block in his neighborhood knew "Mr. Charles". Charles was never one to let his age dictate his zest for enjoying live. Even at the age of eighty, when the doctors told him he would never walk again after fracturing his pelvis, not only did he walk in ninety days, but he did so without the assistance of a cane. On March 5, 2019, Charles Edwin Swanigan departed this earthly life in his long-time Savannah residence. He was preceded in death by his parents and his first wife; sister, Greta Dean Wallace; brother, Michael Swanigan; and brothers-in- law, Fred Wallace and Larry Jackson. Left to cherish the love and memories that he left behind are: three sisters, Brenda Jackson, Rita Hollis, and Emma Allen; three brothers, Joe Austin Jr.; Kenneth and Maurice Swanigan; two sisters-in-law, Debra and Elizabeth Swanigan; His Loving Angel, Mary Simmons; six step-children, Patricia Brown McGirt, Beverly and Harold (Carolyn) McGirt, and Michelle, Latasha, and Randall Simmons; ten step-grand and great-grandchildren along with a host of nieces and nephews, cousins, and friends. Services Saturday, March 16, 2019 at 2:00 pm from the Norwood Funeral Home Chapel with burial in the Beaver Creek Cemetery. Norwood Funeral Home of Guin, AL directing.

The family of Charles Swanigan created this Life Tributes page to make it easy to share your memories.

Our loving brother, Charles Edwin Swanigan, was born to the proud...

Send flowers to the Swanigan family.