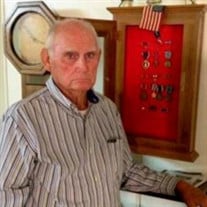 Curtis McDonald age 97 of Winfield, AL formerly of Guin passed away Friday, March 26, 2021 at his son's residence in Guin. Born, June 24, 1923 in Fayette, County, AL he is the son of the late Leonard Curtis and Ellena Blakney McDonald. He grew up in the Wayside Community and at the age of 17 he joined the CCC (Civilian Conservation Corps). In 1942 he was drafted into the US Army where he was a Combat Medic with Company A of the 10th Armored Infantry Battalion, serving in France, Luxemburg, Belgium and Germany. He was awarded the Silver Star for his actions during an attack on his Unit, January 10, 1945. He made five trips into shelled positions to pickup wounded and carry them to the rear for medical help. On March 27, 1945 General Patton issued secret orders sending his outfit, Task Force Bacm, to free a POW Camp with 1500 prisoners near Hamburg, Germany. On the way back he was wounded and captured and sent to Stalag VIIA. On April 29, 1945 they were liberated and sent back to the United States. He was awarded the World War II Victory Medal, American Service Medal, Silver Star, 2 Purple Hearts, Bronze Star, European African Middle Eastern Service Medal with four Bronze Stars, Prisoner of War Medal, Combat Medic Badge, and Distinguished Unit Badge. He worked for John Deere in Moline, IL and moved back to Guin in 1952 and started his own Pluming Electrical Business. He is survived by his Wife, Dean McDonald, Sons, Kevin McDonald and Ronald McDonald, Step children, Sue Ballard, Wayne Ballard and Jerry Webb, Sisters, Virgie Housh, Sue Howell, Gaynell Dunavant and Mary Lou Porter, A Brother, Therman McDonald, a host of Grandchildren, Great Grandchildren and Great Great Grandchildren. He was preceded in death by a Daughter, Jackie Dockery, 2 Sisters, a Brother and 2 Grandchildren. Graveside Services held Monday, March 29, 2021 at 11:00 AM from the Guin City Cemetery with Grice Webb officiating. Memorial Funeral Home of Guin, AL serving the McDonald family.

Curtis McDonald age 97 of Winfield, AL formerly of Guin passed away Friday, March 26, 2021 at his son's residence in Guin. Born, June 24, 1923 in Fayette, County, AL he is the son of the late Leonard Curtis and Ellena Blakney McDonald. He... View Obituary & Service Information

The family of Curtis McDonald created this Life Tributes page to make it easy to share your memories.

Send flowers to the McDonald family.