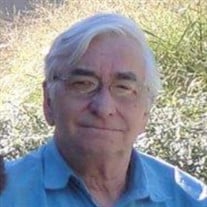 David Simmons, 82, of Guin, Alabama, passed away peacefully on Sunday, November 14, 2021 at his daughter’s home in Dyersburg, Tennessee surrounded by his family. His grandchildren and great-grandchildren knew him as “Daisy” and “GG”. He leaves his two daughters, Tina (Nickey) Cantrell of Dyersburg, Tennessee and Shawn (Terry) Traweek of Winfield, Alabama, along with four grandchildren, Whitney (Tripp) Hutto of Lexington, SC; Christopher Cantrell of Lexington, SC; Tyler (Hope) Traweek of Guin, AL; Brooke Traweek of Tuscaloosa, AL; and five great-grandchildren, Caitlin Hutto & Chase Hutto of Lexington, SC; Sawyer Traweek & Sutton Traweek of Guin, Alabama; and Ava Cade of Tuscaloosa, Alabama. He is preceded in death by his wife, Judy Carolyn Estill in 2011; his father, Reverend Howard Simmons and stepmother, Loudene McKinley in 2008; his mother, Clista Cantrell in 1945; and his brother, Roger Ray Simmons of Picayune, MS in 2019. He was born June 6, 1939 in Barnesville, AL to Ludie Howard Simmons and Clista Cantrell. After graduating from Hamilton High School in Hamilton, Alabama, he studied to be a Lab and X-Ray Technician. He eventually retired from Caraway Methodist Hospital in Winfield, Alabama. He was married to the love of his life, Judy Carolyn Estill, for 52 years. David was an avid CB radio enthusiast and was known as “Horsefly” by his buddies. He was also known for his love of cars and worked briefly for Dewell Emerson Auto Sales in Hamilton, Alabama. For the past two years, David was living in Dyersburg, Tennessee with his daughter, Tina Cantrell, and at Morningside Assisted Living in Jackson, Tennessee. Later he was placed on hospice with Avalon Hospice in Dyersburg, Tennessee. David will be greatly missed by all of his friends and family. Graveside Services held Wednesday, November 17, 2021 at 11:00 AM from the Fulton Bridge Cemetery with Bro. Heath Webb officiating. Memorial Funeral Home of Guin, AL directing.

David Simmons, 82, of Guin, Alabama, passed away peacefully on Sunday, November 14, 2021 at his daughter&#8217;s home in Dyersburg, Tennessee surrounded by his family. His grandchildren and great-grandchildren knew him as &#8220;Daisy&#8221;... View Obituary & Service Information

The family of David Simmons created this Life Tributes page to make it easy to share your memories.

David Simmons, 82, of Guin, Alabama, passed away peacefully on...

Send flowers to the Simmons family.