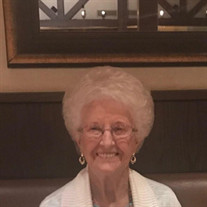 Elaine Stanford McReynolds age 88, of Birmingham, AL passed away Monday, August 3, 2020 at her residence. Elaine was born August 6, 1931 in Lamar County, AL, the daughter of the late Halen and Myrtle Franks Duncan. She graduated from Sulligent... View Obituary & Service Information

The family of Elaine Stanford McReynolds created this Life Tributes page to make it easy to share your memories.

Send flowers to the McReynolds family.