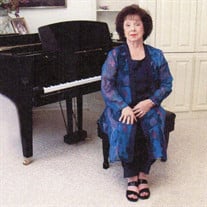 The family requests in lieu of flowers that donations be made to the choir/music ministry at First Baptist Guin. Marie Boone, 83, of Washington, IL (a resident at Washington Christian Village) entered Glory and the presence of her Savior January 9. 2021. There to meet her were parents Joseph Kelly McGowan and Pearlie McGowan, brothers Paul McGowan (Eulean), Carmon McGowan (Margaret), Danny McGowan, her beloved husband of nearly 56 years Donald Boone, Sr. and a host of other family members. She is survived by her sister Margie Koon, daughter Yvette Ackerman (John), her son Lee Boone (Andrea), grandchildren Carmen Jonas, Alex DeCouto, Katie Ackerman, Sam Ackerman, Amber Moore, Chelsea Napier, and great grandchildren Laiden Jonas, Margot Jonas, Michele DeCouto, Oliver DeCouto, and Mayson Moore. Marie grew up in Guin, AL and in her lifetime she also lived in Texas, Georgia and Illinois. Pearlie bought Marie her first piano at the age of five in part to stop Marie from making music by banging on pots and pans. Marie began teaching piano as a teenager to pay for a new piano. Marie became an accomplished pianist appearing on local television and radio programs in Birmingham, AL with the Happy Hitters Quartet when she was young and later playing piano for the gospel groups The Rhythmaires and The Friends Quartet. Marie worked thirty-four years for the Bell System phone company, before running a limousine company for 10 years with her husband Don. Marie and Don retired to Guin, where they were members of the First Baptist Church of Guin. Music always played a large role in Marie’s life as she often played piano at her local church and local gospel singings, despite battling fibromyalgia and arthritis. Marie was fiercely loyal to family and had a dry wit that could make you smile. Family only funeral services will be held at 11:00 AM on Saturday, January 16, 2021 at Memorial Funeral Home in Guin, AL, with burial in the Guin City Cemetery.

The family requests in lieu of flowers that donations be made to the choir/music ministry at First Baptist Guin. Marie Boone, 83, of Washington, IL (a resident at Washington Christian Village) entered Glory and the presence of her Savior January... View Obituary & Service Information

The family of Marie Boone created this Life Tributes page to make it easy to share your memories.

The family requests in lieu of flowers that donations be made...

Send flowers to the Boone family.