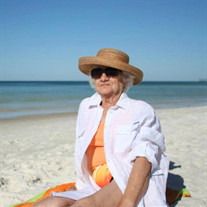 Mary Charles Hawkins age 80 of Beaverton, AL passed away Wednesday, January 15, 2020 at her daughter's residence in Hartselle, AL. Born January 18, 1939 in Lamar County, AL, She is the Daughter of the late Ernest and Mellie P. Webb Lockhart and the Wife of the late Jack Hawkins. She had lived in Beaverton most of her life and was a member of the Liberty Missionary Baptist Church. She had worked at Health Tex until it closed and then went to Nursing School and became a LPN. She is survived by, 2 Daughters, Pamela Jane Jackson (Brian) of Hartselle, AL, Jaqueline Brown (Bill) of Red Bay, AL, A Son, Tracy Lee Hawkins (Tamar) of Beaverton, AL, 4 Grandchildren, Kyle Brown, Austin Brown, Hope Elizabeth Hawkins, and Taylor Nicole Hawkins, and 2 Sisters, Joyce Birmingham of Selma, AL, and Becky Elrod of Hackleburg, AL. She was preceded in death by her Husband Jack Hawkins, 2 Grandchildren, Cody Allen Brown, and Mary Rena Hawkins, and a Brother, Dennis "Bud" Lockhart. Graveside service held Friday, January 17, 2020 at 2:00 PM from the Webb Cemetery with Bro. Kenny Hatcher officiating. Memorial Funeral Home of Guin, AL directing

The family of Mary Hawkins created this Life Tributes page to make it easy to share your memories.

Send flowers to the Hawkins family.