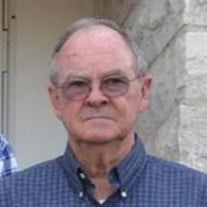 In lieu of flowers memorials may be made to the Guin First United Methodist Church, PO Box 515, Guin, AL 35563 James “Nathan” Mobley, age 84, of Guin, Alabama, passed away May 10, 2021, in the University of Alabama Hospital in Birmingham, Alabama. Visitation, 1:30 - 3:00 p.m., Friday, May 14, 2021, at the Guin First United Methodist Church. Funeral service, 3:00 p.m. at the church, following visitation. Bro. Tim Alexander officiating. Burial in the Guin City Cemetery. Nathan Mobley was born July 29th, 1936 in Fayette County, Alabama, to the late James and Eugie Mobley. He lived in Guin most of his life and had retired after working 40 years for 3M. He was a member of the Guin First United Methodist Church. He loved hunting, fishing, keeping up a garden, telling stories, and his family. He is survived by his 3 daughters, Karen (Keith) Wilemon of Hartselle, AL., Jennifer (Andy) Couch of Mountain Brook, AL., and Andrea (Stephen) Knight of Guin, AL.; 6 grandchildren, Jace (Tiffany) Wilemon, Cade Wilemon, Catherine Grace Couch, Colin Couch, Seth Knight and Caleb Knight; 2 great-grandchildren Casen and Whitley Wilemon, a sister Charlene (Clyde) Sudduth and a host of other relatives and friends. He was preceded in death by his wife, Linda Stone Mobley and parents, James and Eugie Mobley. In lieu of flowers, the family requests donations be made to the Guin First United Methodist Church, PO Box 515, Guin AL 35563 in honor of Nathan. Memorial Funeral Home of Guin, AL serving the Mobley family.

The family of Nathan Mobley created this Life Tributes page to make it easy to share your memories.

In lieu of flowers memorials may be made to the
Guin First United...

Send flowers to the Mobley family.