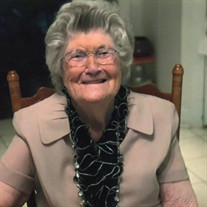 In lieu of flowers memorials may be made to the charity of your choice. Mary Pauline Markham Mary Pauline Markham--95 Pauline entered heaven's gates on March 17, 2021 with family by her side. August 11, 1925 Mary Pauline Danner was born to the late James Edgar (Ed) Danner and Rhoda Isabella Davis of Gattman, Mississippi. She graduated from Sulligent High School and attended college at Ward-Belmont in Nashville, Tennessee. Pauline married the late Kermit Paul Markham in 1947. They resided in Detroit, AL where Mr. Markham began the first battery business in the state of AL known as Alabama Battery. Kermit and Pauline, with other families, laid the foundation to build the First Baptist Church (Detroit Baptist) of their town. In 1971, she was hired as the first kindergarten teacher with Detroit Elementary School where she worked for 17 years before retirement. They raised five children who loved and respected their mother as a lady of strong Christian faith, exemplifying all the fruits of the Spirit: love, joy, peace, patience, kindness, gentleness and self-control (Gal. 5:22 & 23). Pauline had an array of hobbies that included genealogy, painting, reading, cooking and most favorite was teaching Sunday School for over 70 years. She served as Director of Woman's Missionary Union and Sunday School teacher of the Dorcas class at First Baptist Church, Sulligent; and other churches inclusive of: Pleasant Ridge Detroit First Baptist and Cedar Grove Baptist, during her son, Tim Markham's pastorate. At age 93, Pauline was faithfully serving as Sunday School teacher and Director of WMU at Cedar Grove Baptist Church. It was a joy for her and Kermit to invite revival preachers and missionaries in their home. She loved history and wrote the genealogy of her family (Danner) heritage. Pauline saw many changes in her fruitful lifetime and enjoyed sharing stories with a remarkable memory. While enduring the passing of her spouse and five children, she was a ray of hope and strength to her community. Pauline is survived by her son, Mitchell Brooks (Rhonda) Markham; grandson, Nicholas Markham; Granddaughter, Allison (Casey) Souders; great granddaughter, Piper Souders; Son-in-law, Wade Sizemore (Phyllis); daughter-in-law, Carolyn Markham (Rex); sister, Nell (Raybon) Rogers. Pauline was preceded in death by her husband, Kermit Paul Markham (1984); children: Phyllis Carol Sizemore (2018); Stephen Reed (1953); Paul Darwin (2004); Rex Danner (2013); Timothy Lyle (2016). Siblings preceded in death: Gladys Murff (1984); Carl Danner (1968); Davis Danner (1994); Annie Belle Flynn (1994); Martha Joe Jackson (2004); Betty Lou Hall (2006) Her life was a testimony of faith and strength. She will forever be remembered by her numerous nieces, nephews, family, and friends. The family extends their gratitude to Encompass Healthcare of Hamilton, Alabama and the many acts of love and kindness extended especially in the last two years of her life. Public graveside services will be at Carter Cemetery, Detroit, AL at 3:00 p.m. on Saturday, March 20, 2021. Bro. Dan Duncan, Bro. Billy Abrams, Bro. Scott Stokes and Bro. B.J. Mills officiating.

The family of Pauline Markham created this Life Tributes page to make it easy to share your memories.

In lieu of flowers memorials may be made to the charity of your...

Send flowers to the Markham family.