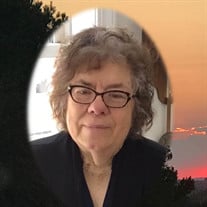 Phyllis Markham Sizemore age 66 of Detroit, AL passed away Saturday, September 29, 2018 at her residence. Born March 23, 1952 in Sulligent, AL she is the daughter of Pauline Danner Markham and the late Kermit Paul Markham, and the wife of Wade Sizemore. She was a graduate of Sulligent High School and Samford University in Birmingham. Teaching was her passion as she taught in High School Mathematics for 25 years in Lamar County and Greensboro High Schools. In addition she taught several years at Bevil State Community College in Hamilton, AL, Northwest Shoals Community College in Phil Campbell, AL and Itawamba Community College in Fulton, MS. For 20 years she has successfully tutored numerous students in math. Phyllis was a member of Alpha Delta Kappa and Alabama Education Retirees Association. Her commitment in the Lord has led her to teach Sunday School for 40 years, and serve in other capacities, such as Acteens, Girls in Action, Vacation Bible School, and as secretary for the Women's Missionary Union. Currently Phyllis was treasurer of Cedar Grove Baptist Church. Being a leader in the community she has served as the secretary for Carter Cemetery over 20 years. Phyllis will be greatly missed by her family, church and community. She is survived by her Husband, Wade Sizemore of Detroit, AL, Mother, Pauline Danner Markham of Detroit, AL, a Brother, Brooks Markham (Rhonda) of McCalla, AL, A Niece, Allison Markham Souders (Casey) of Homewood, AL, A Nephew, Nicholas Markham of McCalla, AL, and A Sister In Law, Carolyn Markham, of Hoover, AL. She was preceded in death by her Father, Kermit Paul Markham and 4 Brothers, Rex, Paul, Stephen and Rev. Tim Markham. Services held Tuesday, October 2, 2018 at 2:00 pm from the Cedar Grove Baptist Church with burial in the Carter Cemetery. Bro. Dan Duncan and Bro. Scott Stokes officiating. Norwood Funeral Home of Sulligent, AL directing.

Phyllis Markham Sizemore age 66 of Detroit, AL passed away Saturday, September 29, 2018 at her residence. Born March 23, 1952 in Sulligent, AL she is the daughter of Pauline Danner Markham and the late Kermit Paul Markham, and the wife of Wade... View Obituary & Service Information

The family of Phyllis Markham Sizemore created this Life Tributes page to make it easy to share your memories.

Send flowers to the Sizemore family.