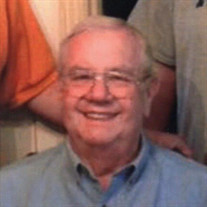 In lieu of flowers memorials may be made to Guin First United Methodist Church, PO Box 515, Guin, AL 35563. Scott Alldredge age 85 of Guin, AL passed away Thursday, January 7, 2021 in the North Mississippi Medical Center in Hamilton, AL. Born August 14, 1935 in Guin, AL he is the Son of the late J.D. and Maude Wright Alldredge and the Husband of Linda Begbie Alldredge. He graduated from Auburn University with a Business Degree. After Scott and Linda were married November 18, 1962, he worked for Redstone Arsenal. In 1965 they moved to Guin where he worked for Munsingwear for 17 years. When he retired from Munsingwar he worked for NTN and also served as Marion County Commissioner for District 5 for 1 term. His last and most rewarding job, where he was a friend to all and loved their repeat visits, was working at Fikes Chevrolet until 2018. He was a member of the Guin Masonic Lodge and the Zamora Shriners Temple and a member of the Guin First United Methodist Church. He is survived by his Wife, Linda B. Alldredge of Guin, AL, A Daughter, Lisa Alldredge Nichols (Bim) of Moundville, AL, A Son, James David Alldredge (Laura), of Fayettville, GA, 4 Grandchildren, Cole Vickery, Derek Vickery, Jimbo Alldredge (Katherine), and Katie Leigh Alldredge, and 3 Great Grandchildren, Cooper Vickery, Charley Kate Vickery and Jackson Vickery. Services held Monday, January 11, 2021 at 11:00 AM from the Guin First United Methodist Church with Burial in the Guin City Cemetery. Pastor David Allison and Dr. Tim Alexander officiating.

The family of Scott Alldredge created this Life Tributes page to make it easy to share your memories.

In lieu of flowers memorials may be made to Guin First United...

Send flowers to the Alldredge family.