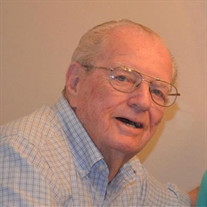 In lieu of flowers the family requests donation be made to Amedisys Hospice, 412 S. Court Street Suite 302, Florence, Alabama 35630. Benjamin “Troy” Hightower, age 92 of Guin, AL, passed away Wednesday, October 23, 2019 at his residence. Born on December 12, 1926 in Guin, AL he was the son of the late Jelks and Grace Akins Hightower and the husband of Emma Rowell Hightower. He graduated from Marion County High School in 1945 and also graduated from Massey Business College in Birmingham. He started his career as a bookkeeper for D.F. Mobley and later purchased the oil business which he ran for many years. While operating that business, he always helped those in need. He served as a member of Guin City Council for 25 years, was a founding member of the MCHS Band Boosters, a charter member of the Guin Civitan Club, served on the Advisory Board for State Bank & Trust for 27 years and was also a Mason. He was preceded in death by his parents, Jelks and Grace Hightower, and brother Gilbert Hightower. Survivors include his wife of 67 years, Emma Hightower; children, Ben (Mary) Hightower of Fayette, AL, and Amy (Tracy) Parker of Guin, AL; sister, Mildred Webb of Birmingham, AL; grandchildren, David (Brandi) Hightower of Spring Hill, TN, Brent (Alanna) Parker of Guin, AL, and Mark (Bethany) Hightower of Guin, AL; and great-grandchildren, Palmer Hightower, Addie Grace, Cason, and Carson Parker, and Hayden and Hudson Hightower. Visitation will be held from 10:00 a.m. to noon on Saturday, October 26 at Guin First United Methodist Church with the funeral service immediately following. Burial will be in Guin City Cemetery.

The family of Troy Hightower created this Life Tributes page to make it easy to share your memories.

In lieu of flowers the family requests donation be made to Amedisys...

Send flowers to the Hightower family.