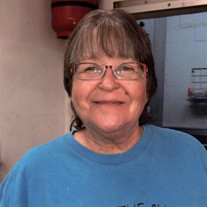 Vicky Webb Lacey age 61 of Guin, AL passed away Monday, October 7, 2019 in the North Mississippi Medical Center in Tupelo, MS. Born February 9, 1958 in Rock Island, IL, she is the daughter of Pauline Jones Birmingham and the late Robert Webb. She had lived in Guin most of her life and worked at Jim Bo's BBQ in Guin. She is survived by her Husband, Tommy Lacey of Guin, AL, Daughter, Cassandra Lacey of Guin, AL, 2 Sons David Webb and Brian Lacey both of Winfield, AL, Mother, Pauline Birmingham of Guin, AL, a Sister, Pamela Webster of Winfield, AL and a Brother, Jeffrey Webb of Kennewick, WA, 14 Grandchildren and 6 Great Grandchildren. She was also preceded in death by a Son, Jamie Lacey. Services held Friday, October 11, 2019 at 2:00 PM from the Norwood Funeral Home Chapel with Bro. Kenny Hatcher officiating. The family will have a private burial at a later time. Norwood Funeral Home of Guin, AL directing. In lieu of flowers the family request donations be made to help with expenses.

The family of Vicky Webb Lacey created this Life Tributes page to make it easy to share your memories.

Send flowers to the Lacey family.