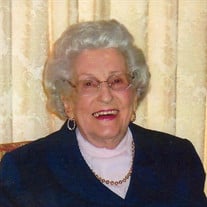 In lieu of flowers memorials may be made to Asera Care Hospice, St. Jude's Children's Hospital or the Samaritan's Purse Ministries. Christine Wise age 103 years 10 months and 7 days passed away Monday, February 11, 2019 at her residence with her family by her side. She had been cared for by family members and several exceptionally skilled and loving women of the Asera Care Hospice team. She was privileged to be prayed for and visited by friends and family until the very end. Christine was born in Mooreville April 4, 1915 in Lee County, Mississippi. As she often said, "I was the fourth child, born in the fourth month, on the fourth day." She lived in Monroe County, MS for most of her younger years as well as after her marriage to Loren D. Wise. The couple had a daughter, Shirley and two sons, John D. and Ned. Christine worked at Gulf Ordnance Plant in Prairie, MS during World War II; after the war ended, she and her family moved to Alabama. They moved to Chicago, IL in the fifties, where Christine worked at Gits Molding Company. She later earned a certificate in cosmetology and worked as a hair dresser for 42 years. Christine and Loren returned to Alabama in 1968, settling just outside of Sulligent. She was a long-time member of the Sulligent First United Methodist Church, serving others faithfully well into her nineties. Christine enjoyed gardening and tending to her flowers; cooking for family and friends; playing cards and dominoes; and traveling. Most of all she loved spending time with people of all ages. Rarely at a loss for words, Christine was a great practitioner of plain speaking, yet somehow she managed to charm others with her unpredictable sense of humor and fun-loving nature. Even when her physical state suggested otherwise, she remained truly "young at heart" because she never thought of herself as old. She is survived by a daughter: Shirley Brown of Sulligent, AL, two sons: John D. (Lucy) Wise of Topaz Lake, NV, and Ned (Liz) Wise of Aberdeen, MS, seven grandchildren, David (Portia) Brown, Linda (Sandy) Harris, Alan Wise, Greg (Hiromi) Wise, Steven (Melissa) Wise, and David (Allyson) Wise, five great grandchildren, Andrew, Ian and Carrie Brown, Damian and Slade Wise, and four step grandchildren and great grandchildren, John (Ruby) Uyguangco, James (Nelly) Uyguangco, Wilson (Lindsey) Beck and Elizabeth Bullock, a sister, Clara Gerlich of St. Cloud, MN and a host of nieces and nephews. She was preceded in death by her parents: John Thomas and Sarah Daisy Beard Moorman, husband: Loren Douglas Wise, three sisters: Lucille Pennington, Thelma Mouselite, and Alma Mae Gosa and four brothers: Archie, Dewey, Cecil and Clark Moorman. Services held Friday, February 15, 2019 1:00 pm from the Norwood Funeral Home Chapel with burial in the Wesley Chapel Cemetery. Bro Kenny Hatcher and Bro. Randy Raper officiating. Visitation will be Friday, February 15, 2019 from 11 am to 1:00 pm at the funeral home. Norwood Funeral Home of Sulligent, AL directing.`

In lieu of flowers memorials may be made to Asera Care Hospice, St. Jude's Children's Hospital or the Samaritan's Purse Ministries. Christine Wise age 103 years 10 months and 7 days passed away Monday, February 11, 2019 at her residence with... View Obituary & Service Information

The family of Wilda Christine Wise created this Life Tributes page to make it easy to share your memories.

In lieu of flowers memorials may be made to Asera Care Hospice,...

Send flowers to the Wise family.